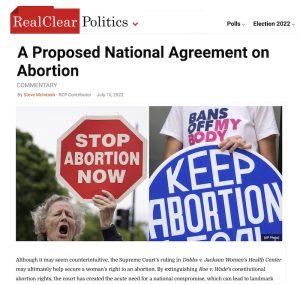 In the case of Dobbs v. Jackson Women’s Health Organization, the Supreme Court has overturned its long-standing recognition of a woman’s constitutional right to an abortion, holding that the question of abortion rights should be decided on a state-by-state basis.

As shown in the New York Times chart below, abortion will now become completely illegal in 15 states, with at least another 10 states expected to restrict abortion prior to the point of fetal viability. But even as 25 states now move to restrict abortion rights, according to the latest Pew poll, a record 61% of Americans say they prefer the previous status quo of Roe v. Wade.

Yet notwithstanding the large majority who favor robust abortion rights, and notwithstanding the fact that Roe’sconstitutional right to abortion has been the law of the land since 1973, a significant minority of Americans continue to strongly oppose abortion due to what they see as a fetus’s right to life.

We want to help mend the torn social fabric of American culture. 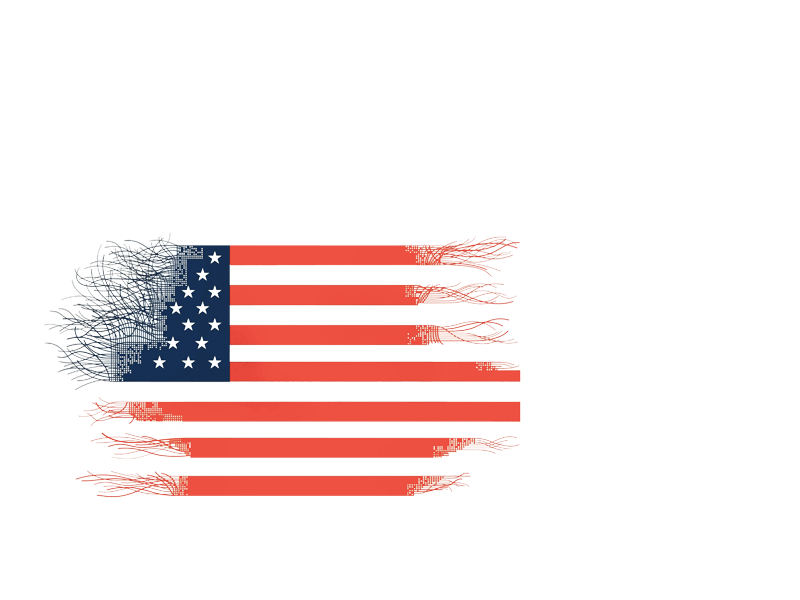 Join The Conversation On Social Media 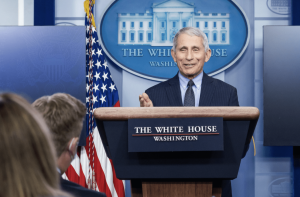 “In this house, we trust science.”

How many times have I read that declaration on a lawn sign while walking down the street in Oakland or Berkeley or Austin or Boulder or Denver? It’s a political statement, a nod to the primacy of expertise in an era of “anything goes” when it comes to who we trust and who we believe.  At first glance, a societal rift between politics and truth would seem a dangerous trend that heralds a host of future problems. How can our politics succeed if we can’t trust science? Or is such expertise a thing of the past? In a world where every political position seems to have its own “expert” opinion makers, has expertise been fully polarized, never to be broadly trusted again?

The Implications of Web3 for Cultural Evolution

Steve McIntosh recently sat down with Institute for Cultural Evolution Fellow, Gary Sheng, to discuss the implications Web3 technologies might have on Cultural Evolution. In this discussion, Gary explains what Web3 is, how he got involved with it, and why he is so excited about its potential.

The Daily Evolver, with Jeff Salzman, examines current events through a developmental lens. New episodes are broadcast live on the Developmental Politics Facebook Group every Wednesday at 1pm MT (12pm PT, 2pm CT, and 3pm ET).* If you miss it live, you will be able to watch edited episodes here at The Developmentalist.

* Please note that Jeff will be taking a summer hiatus for the Daily Evolver. New episodes will return on September 7th, 2022.

In this episode, Carter and Steve reflect on the current progressive inclination to highlight the wrongs of America’s past, in contrast to traditional patriotism. Certainly, there’s much to be ashamed of in our nation’s historical record, especially the horrors of slavery, segregation, and the violence perpetrated against Native American populations. But should we allow that shame to eclipse any expression of national pride? Inspired by Steve’s recent article “The Politics of Pride and Shame: Integrating 1776 and 1619,” this conversation explores a potent cultural polarity and asks how we might come to a more integrated synthesis.

Responses to 10 Potential Objections to Our Developmental Political Approach

How can you justify your claims that the developmental perspective is “higher” or “more evolved”?
Anyone who wants to make the world a better place must be willing to point in the direction of “better.” Even those who advocate value relativism are, ironically, nevertheless claiming that their interpretation is superior. Developmentalists don’t claim to know what’s better with certainty or finality—we seek to continuously improve our definition of improvement itself. Nor do we claim that the developmental worldview is absolutely better than the worldviews of progressivism, modernism, or traditionalism. We advocate the developmental perspective primarily because it’s more inclusive, because it encompasses a wider range of values, and because it has greater explanatory power than these other value frames.

Our Invitation to All Sides

The developmental approach to politics welcomes anyone, from anywhere on the political spectrum, willing to dialogue and seek solutions in good faith. To find out more about how developmentalism attempts to include your political values, please select the circle that best represents your political identity:

Are You A Developmentalist?

Take a 2-minute test of your political developmentalism, and see your “transcendence and inclusion score.”

This simple test asks you to select your level of agreement or disagreement with twelve political statements. The test results will indicate your inclusivity score, your transcendence score, and the overall extent of your developmental perspective on politics.
» 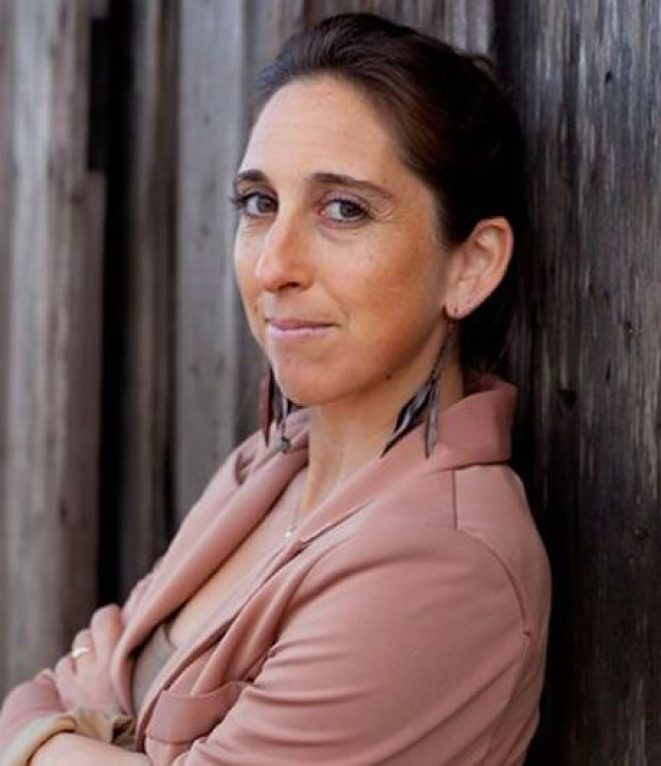 Polarities On The Left & Right 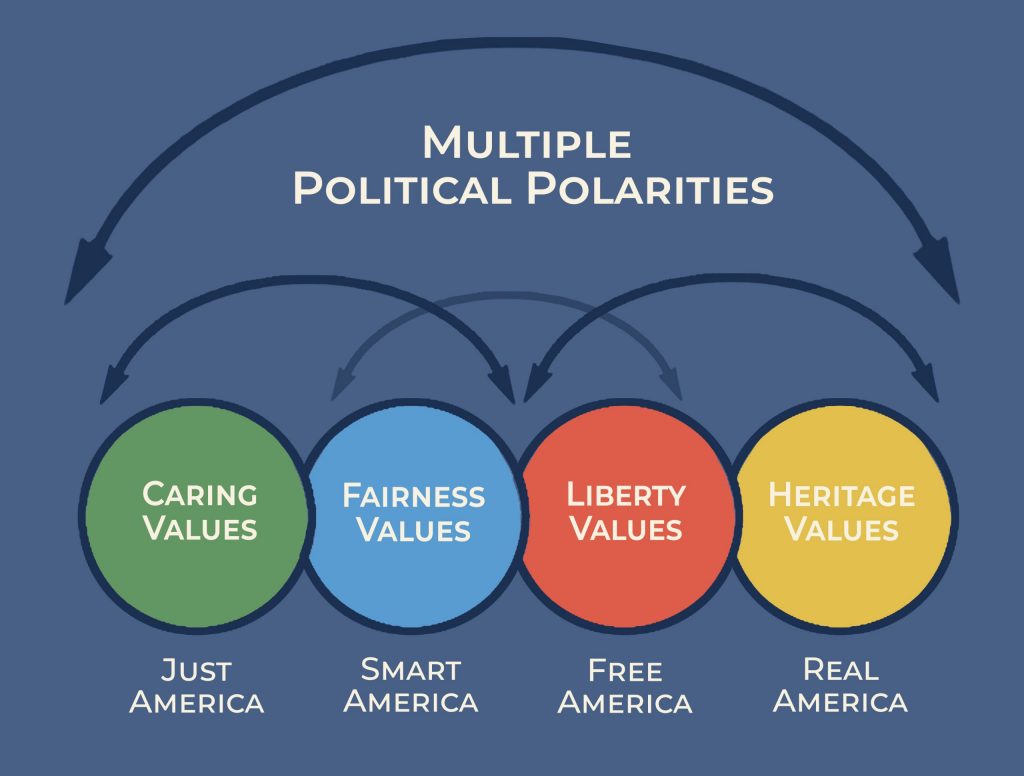 This series of graphics shows how America’s three major worldviews—progressive, modern, and traditional—map onto the familiar political spectrum of left and right. As journalist George Packer writes in The Atlantic Magazine, there are now “four Americas,” which he labels Just America, Smart America, Free America, and Real America. We identify these same categories as Caring Values, Fairness Values, Liberty Values, and Heritage Values.
»

Deeper Dive Into
Our Approach

Article: Toward a
Post-Progressive
Perspective

The Developmental Alliance (TDA) is a new nonprofit membership association for people who identify with the emerging developmental political perspective. Through conversation and fellowship, we are exploring and advancing a new kind of cultural and political higher ground.